Welcome to our new site!

Have you seen our blog on Cam Timing Notes? Dave has written up a companion history of the Camshaft.

The Brain of Your Triumph B Range Engine- the Camshaft 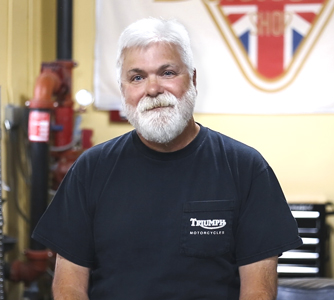 By David Porter, Customer and Technical Support at The Bonneville Shop

This overview of the camshafts and their function in the Triumph 650 and 750 engines is intended to help familiarize the engine builder with the evolution and applications of the intake and exhaust camshafts. The specifications of cam timing, duration, and lift are covered in detail in a previous blog, titled “Cam Timing Notes”. Please view this technical article for more detailed set up information. It has been said that the camshaft is the brain of the internal combustion engine, as it synchronizes the valvetrain events that contribute to determining the character of the motor. The camshafts work in harmony with the cam followers, (or tappets), pushrods, rocker arms, valve springs, and valves to produce the sequence of valvetrain function in the Triumph twin engines.

“It has been said that the camshaft is the brain of the internal combustion engine, as it synchronizes the valvetrain events that contribute to determining the character of the motor.”

In the beginning, when the first 650cc Triumph model was introduced in 1950, the 6T used the same 70-2302 camshafts in the inlet and exhaust position. This practice followed into the later T100, TR5, 5T, and 6T pre-unit models, specified with the 70-3275 camshafts, inlet and exhaust. These cams featured a “ramped” cam form and required valve clearances of .010”. The T110 model, considered a high-speed touring performance model, used the 70-3325 camshafts and required tighter valve clearances of .002” inlet and .004” exhaust. The late pre-unit 6T models continued on with the 70-3275 camshafts, but the TR6 and T120 saw the introduction of the 70-3134 inlet camshaft and continued on with the 70-3325 cam in the exhaust position. 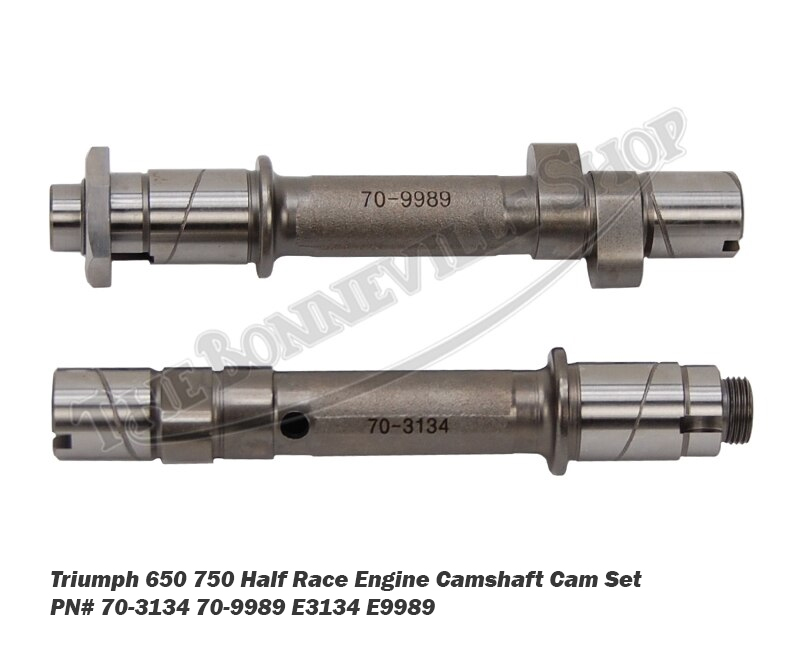 With the introduction of the unit-construction B-range models in 1963 came the new points ignition. The timing cover now featured a new timing chest cast into the cover, with a mechanical auto-advance unit and contact breaker plate housed in the timing chest. The advance unit was driven by the exhaust cam, which necessitated separate inlet and exhaust camshafts. The 6T Thunderbird was still the touring model in the range, and thusly retained the ramped cams, now identified by 70-4818 inlet, and 70-4848 exhaust. Valve clearances remained at .010”, and the 6T engine was identified by a “wagon wheel” image stamped onto the drive-side crankcase half next to the serial number. This followed up through the 1966 model year, after which the Thunderbird was retired from the range. The 1963 TR6 and T120 sports models saw the introduction of the 70-4819 inlet cam, based on the 70-3134 profile, and the new 70-4855 exhaust cam, which now had a tapered bore on the timing-side end of the camshaft for driving the advance unit. This configuration continued on through the 1966 model year, although the 70-3059R inlet tappets were specified for the T120. The previous tappets used in the early unit engines were of the standard ¾” radius, but the new hot-rod 1966 Bonnevilles saw the introduction of the R-radius (1-1/8”) inlet tappets. The R-radius tappets are visibly flatter than the standard tappets and allow for a longer duration of time the valve stays open. Another new feature to the 1966 engines was the adoption of new exhaust tappet guide blocks with oilways for the exhaust tappets. The oil was fed through a passage in the crankcase and cylinder barrel in an effort to combat premature wear on the exhaust camshaft lobes and tappet faces. This was the “Muscle Car” era, and American buyers were receptive to some of the other performance upgrades to the 650 models, such as the lightened narrow crankshaft flywheel,  9:1 compression ratio pistons, new drive-side crankshaft main roller bearing, and the shorter sports silencers. The 1967 and 1968 models used the same inlet cam profiles as the 1966 models, although a new part number of 70-5047 appeared for the exhaust camshaft, which had the same profile and timing detail as the 70-3134 inlet cam. The exhaust cam followers were updated to 1-1/8” “R” radius for the 1968 model, listed as 70-8801. This combination of R radius tappets was used through the lifespan of the 650 models.

“Another new feature to the 1966 engines was the adoption of new exhaust tappet guide blocks with oilways for the exhaust tappets.”

In an ongoing effort to prolong the camshaft’s lifespan, a nitride surface treatment was applied to the camshafts for 1969, considered an important upgrade for service reliability well beyond the warranty period. The new nitrided cams were listed as 71-0040 inlet and 71-0041 exhaust, both using the high-performance 70-3134 sports/racing profile. The 71-0040 inlet cam was the last of the hollow shaft cams with the vent hole for the timed breather system, which would change for the 1970 models and continue on to the end of the B-range engines. The revised crankcase venting system for 1970 meant that the drive-side crank oil seal was omitted and three tiny holes were drilled into the inner primary chain case, which, along with the open crank bearing, allowed engine oil and crankcase pressure to be vented directly into the chain case, then routed to atmosphere through a breather stub on the back of the chain case. The drilled holes also had a self-leveling function to maintain the proper oil level in the primary chain case. The new camshafts for 1970 not only were both solid-core castings, but were updated to Unified threads. They still were based on the 70-3134 profile, and carried the part numbers of 71-1063 inlet, and 70-9989 exhaust. This combination was used, along with the 70-3059R and 70-8801 tappets through the final iteration of the 650 engines through 1972. 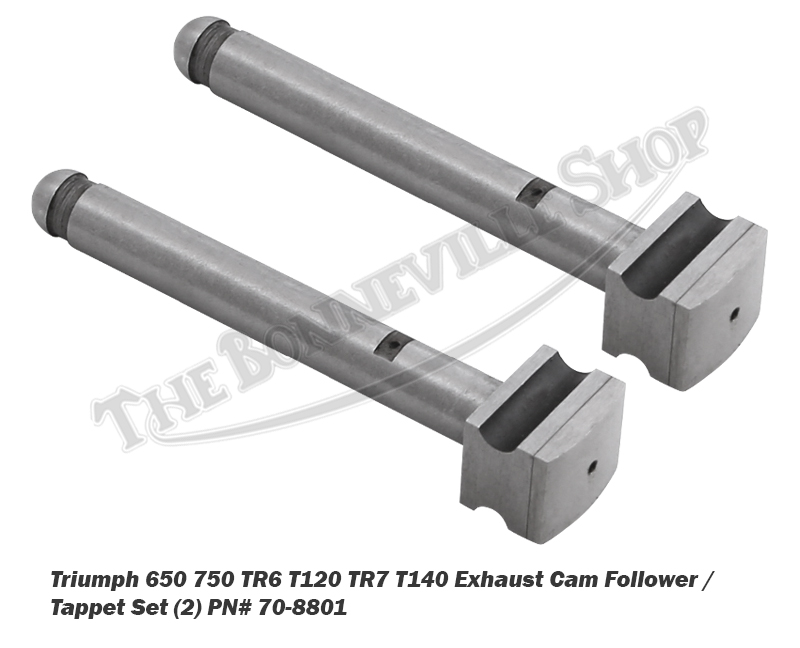 The 1973 models were introduced in the fall of 1972 as 724cc TR7V and T140V models, but revised to a 747cc displacement after the first three months of production. The new 71-3011 inlet camshaft was introduced, along with the 70-3059 standard radius tappets, while the exhaust camshaft was listed as 71-3010 (or 71-3012) and was paired with the R radius 70-8801 tappets. The valve clearances were increased to .008” inlet and .006” exhaust to accommodate the new cams with the inlet cam having a more aggressive profile with steeper ramps, more lift and longer duration. The exhaust cam was slightly milder than the 70-3134 and was specified with R radius tappets. This combination of camshafts and tappets was used into the 1974 model year. It was during this time period that some unusual variations of specifications were in place due to the effects of the strike at Meriden, so it is entirely possible that some of the units that left the works had different camshaft and tappet specifications. The 1976-1982 TR7V and T140V models were specified with 71-7016 inlet and 71-7017 exhaust camshafts. The 71-7008 inlet tappets remained standard radius, and the 70-8801 exhaust tappets were R radius, at least through 1980, after which the 71-7008 standard radius tappets were used in both inlet and exhaust positions. Once the advent of restrictive emissions became a reality in the mid-1970s, and was further compounded by the 1978 EPA mandate, cam profiles were generally milder, with cam timing alterations also in place to detune the 750 models.

In general, performance camshafts can be configured for increased horsepower at higher engine speeds, or for increased torque in lower RPMs. The preferred performance cams are often a hybrid that will produce increased mid-range punch, without a loss of high-RPM power capabilities. Expert engine builders and tuners have learned how to tweak the cam timing to achieve the desired results on the street, or on the racetrack. Many aftermarket camshaft manufacturers will supply specific instructions on cam timing and recommendations on which tappets are to be fitted with a given cam grind. We supply quality UK-made camshafts from LF Harris, including the renowned 70-3134 and 70-9989 “Q” cams, described as “Half-Race”. These can be fitted to any unit-construction Triumph 650 or 750 model from 1963-1982, and they are our most popular camshaft combination for street use in 650 motors. 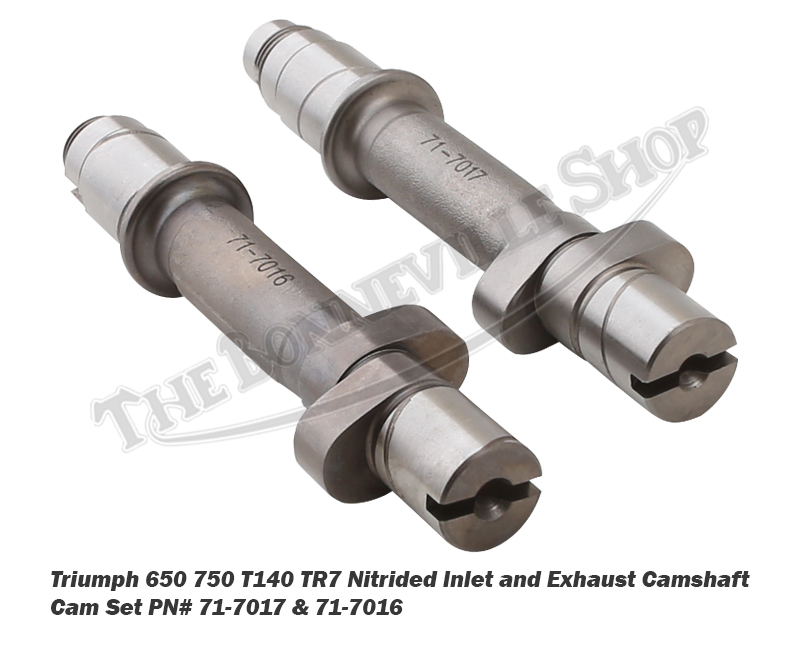 We also supply the 71-7016 inlet and 71-7017 exhaust camshafts for direct replacement in the 1977-1982 750 models, although they are suitable for fitment in the 1970-1972 650 and 1973-1976 750 models with the primary chain case breather system. Also available is the 71-7017 R exhaust cam, in the “Spitfire” race grind, based on the 71-7016 inlet cam form. All of the camshafts offered by The Bonneville Shop are manufactured by LF Harris with the nitrided surface treatment to ensure long service life, and we recommend that the cam followers be replaced when new camshafts are fitted. Please review our tech blog “Cam Timing Notes” for more specific technical information regarding camshaft selection and recommended set up specifications. Thanks for reading this overview on B range camshafts.

Click or Tap Here for the Cam Timing Notes Blog

This website uses cookies to improve your experience while you navigate through the website. Out of these cookies, the cookies that are categorized as necessary are stored on your browser as they are essential for the working of basic functionalities of the website. We also use third-party cookies that help us analyze and understand how you use this website. These cookies will be stored in your browser only with your consent. You also have the option to opt-out of these cookies. But opting out of some of these cookies may have an effect on your browsing experience.
Necessary Always Enabled
Necessary cookies are absolutely essential for the website to function properly. This category only includes cookies that ensures basic functionalities and security features of the website. These cookies do not store any personal information.
Non-necessary
Any cookies that may not be particularly necessary for the website to function and is used specifically to collect user personal data via analytics, ads, other embedded contents are termed as non-necessary cookies. It is mandatory to procure user consent prior to running these cookies on your website.
SAVE & ACCEPT